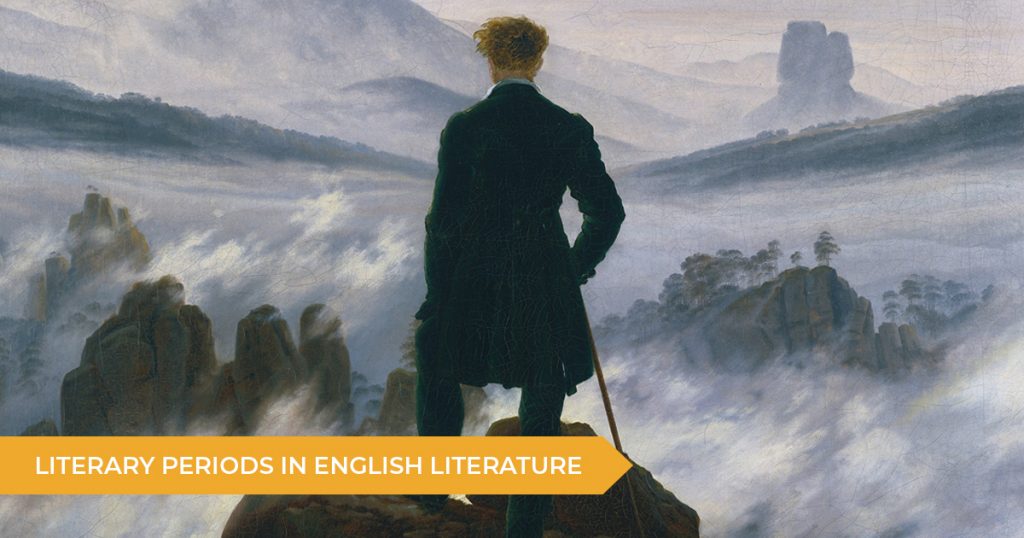 Exploring major literary periods which shaped English and contemporary literature – which helps us find meaning in the texts written in this time.

Romanticism was a specific, complex, widespread movement in thought and culture. It continues to have a huge influence on our own era’s poetry, novels, songs, films and sometimes our entire philosophy of what life is about.

This kind of Romantic is always written with a a capital ‘R’ – don’t confuse it with the narrower, Hollywood-style, small-‘r’ idea of “romantic” that just means related to being love. Romantic (capital-‘R’) thoughts and values are something different and further-reaching. The outline of Romanticism below aims to provide you with a brief account of the ideas associated with it.

Romanticism originated in the late eighteenth century (1700s) in Western Europe. In part, it was a reaction against the Industrial Revolution, and certainly Romanticism developed and strengthened over this period of enormous industrial development. Huge sections of England’s (and other countries’) natural landscape were being consumed by the spread of factories and railways at an astonishing rate, and more people were transitioning from traditional small-community life, to much more condensed, anonymous population structures built around factory work. This enormous revolution, in many ways, posed a threat to nature and humanity as the world knew it.

Romantics strove to cry out against what they often perceived as our weakening connection with nature, with one another, and with our inner selves. Sometimes they expressed this through fear and literary protest,; sometimes through the joyful celebration of the kinds of connections and values that they want us to hold onto.

Literary scholars typically single out six poets as the major figures of this period: Wordsworth, Coleridge, Byron, Percy Shelley, Keats, and Blake. It’s important to note that the writers of this period did not think of themselves as “Romantic”, or even as necessarily belonging to some movement together. Like a lot of cultural classifications, the term wasn’t applied until half a century later, by cultural historians. None of these poets can be simply unified by one distinctive Romantic characteristic – but they can be seen to manifest certain Romantic qualities.

RELATED: What is context in English Literature?

Here are some of those qualities that can help us better understand this widespread movement called Romanticism:

You don’t have to spend long looking through collections of Romantic poetry to realise just how much the natural world is a primary poetic subject for them. Wordsworth, Shelley, and (even more) Coleridge and Keats described natural phenomena – like landscapes, weather, rocks, flowers, animals  with an accuracy and sensitivity that went beyond all earlier poetic movements in terms of its passionate yet subtle detail. But the aim of Romantic poetry is never just description for its own sake. Nature serves as a stimulus for the most characteristic human activity, which the Romantics dedicated themselves to: personal thinking and feeling.

The focus on personal thinking and feeling in Romantic poetry very much stems from its emphasis on the importance and value of our own individual experiences and perceptions. Neoclassical poetry (the predecessor to the Romantic age) was mostly focused on other people, and not generally about the poet. Many Romantic poems, both long and short, invite the reader to identify the persona of the poem with the poet themselves.

The Industrial Revolution arguably threatened to smother people’s individuality and spirit by taking more and more people out of traditional communities and reframing their lives as anonymous factory workers and city dwellers (often in horrendous conditions). Much Romantic poetry incorporates a highly personal element, and encourages us to reflect on our own personal ideas, feelings and experiences as the very core of what matters about being alive. This is a kind of implicit or explicit protest against having our personal identities and feelings destroyed or ignored by an uncaring world.

The supernatural and irrational

A great deal of the poetry of this period manifests a strong supernatural theme. Coleridge’s poetry, for example, often incorporates the realm of mystery and magic, in which material from ancient folklore, superstition and demonology are used to impress upon the reader a sense of occult powers and unknown ways of being.From some angles, this can be seen as another aspect of the reaction against the potentially dehumanising effects rampant industry and purely commercial science: if pure logic and rationality lead to life-destroying factories and slums, then maybe our more irrational and illogical faculties like imagination, wonder and awe can help us reclaim what makes us human and alive.

The Spirit of the Age: “Infinite Striving”

There’s a sense in romantic writers that theirs was a great age of new beginnings and high possibilities. Many writers of the time viewed a human being as endowed with a limitless capacity for hope and goodwill – which would make it our duty to keep seeking truth, beauty, love and genuine understanding of ourselves and each other and the world. Some of these ideas, when described so briefly, might sound like a cliché, and indeed they became so influential that in some modern cases they have become a cliché. What we need to appreciate is how urgent and distinctive this “spirit of the age” was, when the Romantics were composing.

Excel in English this year with the help of Talent 100 Education.

Learn more about our English Year 7 – 12 course structure, 1-1 tutorials, weekly writing tasks and how we can take your marks to the next level with face-to-face and online class options. Click here for more information.