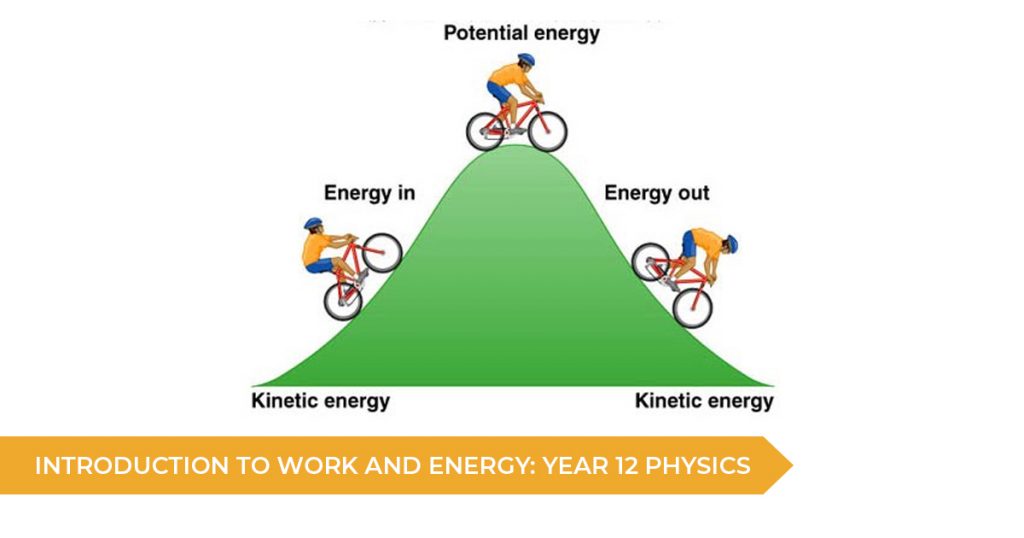 Introducing the concepts of Work and Energy in relation to Advanced Mechanics, part of Module 5

It should be noted that whilst force and displacement are both vector quantities, work is a scalar quantity.

Energy is defined as the capacity to do work. It is measured in joules. Conversely, work can be considered a transfer of energy between objects.

The net work done on an object is equal to the change in energy of said object:

Kinetic energy is the energy possessed by an object because it is moving. Since moving objects can collide with other objects and in doing so apply a force on them (and thus do work on them), they must possess a type of energy. An object’s kinetic energy is dependent on both its speed and its mass. Quantitatively this relationship can be described as below:

Potential energy can be more easily understood using the concept of work. Let us look at the following example:

An apple is picked up off the ground and lifted to a height of 1m. At all times the apple is experiencing a downwards force towards the ground due to gravity. To overcome this weight force, an upwards force on the apple has gained energy as a direct result of its position above the ground. This energy is the gravitational potential energy of the apple.

Quantitatively we can determine the potential energy of an object in a field, calculating the work required to place it there. This requires the use of Newton’s 2nd Law of Motion, and yields the following two equations for gravitational and electric potential energy.

Talent tip: When the force is not uniform, a different formula is required to determine the potential energy. These equations will be taught later in this course, and their derivations require the use of integration.