How To Read And Understand Shakespeare 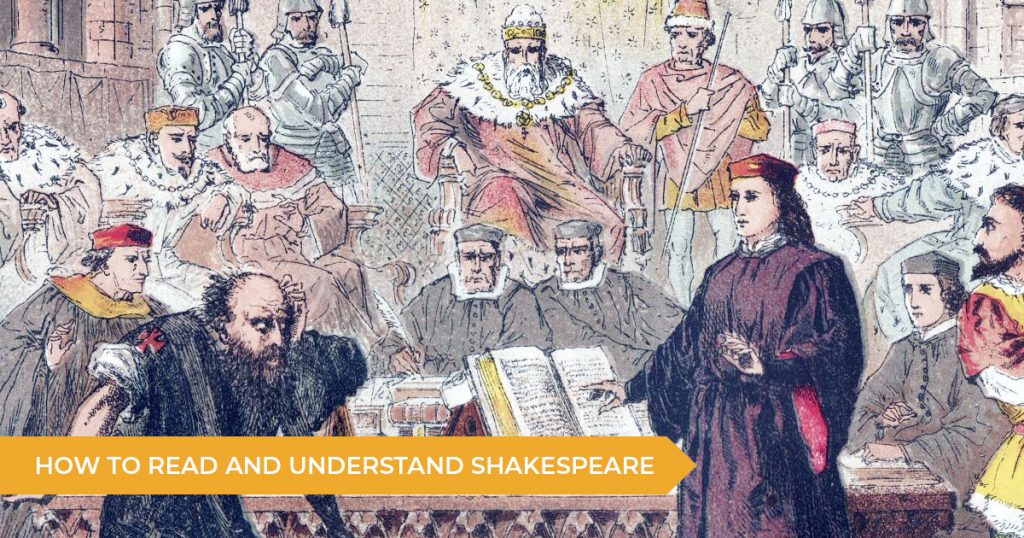 In the HSC Advanced English syllabus, Shakespearean drama is a required text for study in Year 12.

This means that all students across New South Wales will study either: The Merchant of Venice, Richard III, The Tempest or Henry IV Part 1 at some point in their final year.

Shakespearean texts are challenging for many reasons. They are written in archaic English, using words, grammatical structures and references to religion, myths and historical events which are all unfamiliar to modern readers.

Shakespeare’s characters often speak in metaphors, symbols and other complex language patterns which can make their meaning unclear. And so, Shakespearean dramas are dense texts with a great deal of information to unpack. But within this depth, students can find a rewarding and meaningful reading experience by engaging with the way Shakespeare’s language shapes meaning.

These are a few guidelines to follow which can greatly improve your comprehension of Shakespearean drama.

– Speak the lines aloud, pausing at punctuation marks instead of at the end of each line.

– Sometimes words are arranged in irregular order (the term is inverted syntax, or hyperbaton). Look at the nouns and verbs to figure out what the sentence would look like in normal order.

– Look up phrases which are unfamiliar, usually in the footnotes of your edition the more archaic phrases will be defined.

– Recognise which sentences are literal and which are metaphorical.

Lastly, there are a number of plain-English translations of Shakespearean texts accessible online. While these can help readers enjoy the plays for their plots and characters, ultimately the quotes and techniques which form an analytical essay will need to come from Shakespeare’s original text. Modernised versions can be helpful but also limiting, so our tips are mostly focused around building understanding of the original language.

Let’s put our guidelines in practice by looking at the opening lines of The Merchant of Venice, which many students will be studying as part of the Common Module. If this isn’t your text, there are still come useful strategies to glean from this process. 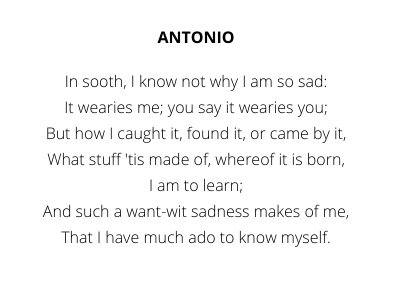 Let’s break it down into its core sentences, to see how it functions.

“In sooth” is an old way of saying “honestly”. “I know not” is an inverted way of writing “I do not know”. So, this sentence becomes: “Honestly, I do not know why I am so sad”.

Sentence 2: “It wearies me; you say it wearies you.”

This one is more straightforward, and we should assume the “it” refer to the sadness. Here, he’s saying his sadness tires him out, and “you”, we can assume to be the friend he is talking to, is also tired out by his sadness.

Here is where reading until the next full stop (or semicolon!) is useful, since it’s a longer sentence, and again with inverted syntax Let’s start with the end, “I am to learn”, which means the same thing as “I’m yet to find out.” The rest is a list of where this sadness might have come from. When it’s read aloud, words like “tis” and “whereof” make much more sense. So in total this sentence becomes:

“I’m yet to find out how I caught this sadness, or found it, or came by it, or what stuff it is made of, or where it is born.”

Sentence 4: “And such a want-wit sadness makes of me,//That I have much ado to know myself.”

This line needs a lot of rearranging. Want-wit is a noun meaning “idiot” (literally someone who wants wit). Ado means “trouble”, but here it’s closer to “difficulty”. Now we need to figure out what the main nouns and verbs are – in the first phrase, “sadness” is the noun doing the action, and “makes” is the verb. Once they’re shuffled out of the inverted syntax, does the sentence start to make sense?

RELATED: These Books Will Develop Your HSC English Language Skills

“And sadness make such a want-wit out of me, that I have much ado to know myself.”

“Honestly, I do not know why I am so sad. I’m tired because of it, you say you’re tired of it too. But I’m yet to find out how I caught this sadness, or found it, or came by it, or what stuff it is made of, or from where it is born. And this sadness makes such a fool out of me, that I have trouble to know myself.”

In this speech, Shakespeare begins The Merchant of Venice by showing us Antonio’s problem: that he is plagued by this strange sadness that has no source, and yet makes him tired every day. He uses subtle choices of words to suggest that his sadness is a kind of infection or curse, which has invaded his life and refuses to go away. It’s something that many people in our modern day could still relate to.

So now we understand how Antonio is feeling, let’s see how his friend reacts:

This one line is a great example of how Shakespeare uses metaphor to create meaning. Salarino is trying to offer up a reason why Antonio is sad, and so he suggests that it might be because of unresolved anxiety. Later in this speech Salarino reveals that Antonio has all his money invested in trade ships sailing to ports all around the world – but these ships are always at danger of running into a storm.

To put it literally, Salarino could have said: “Your mind is troubled because you’re thinking about your investment ships”. But here, “your mind is tossing on the ocean”, uses a metaphor to convey that Antonio’s mind is troubled and unsteady like the ocean, but also that his mind is just like the ships he has invested in. This is a very elegant way of expressing the idea, by using metaphorical language to help the audience better visualise the problems and tensions which are established at the start of the play.

We can also interpret Salarino’s speech as creating tension between Antonio and the other characters. Whereas Antonio insists his sadness is unknowable, has no source, and isn’t going to be easily fixed, Salarino attempts to offer simple solutions. Readers can relate to times in which they have felt sad, and potentially been put into an even worse mood by telling them to just “get over it”.

And now, from our analysis of Shakespeare’s language, his user of characterisation, metaphor and word choice, we can link an aspect of a play to a human experience. Hopefully this process provides ideas ad strategies to tackle any Shakespearean text. By reading Shakespeare in this way, looking closely at the original language itself, students can unlock the deeply meaningful representations to craft insightful essay responses.

Excel in English this year with the help of Talent 100. Learn more about our Advanced English course structure, 1-1 tutorials, weekly writing tasks and how we can prepare you for the HSC with face-to-face and online class options. Click here for more information!