How To Create The Best HSC Study Notes

How to create the best HSC study notes 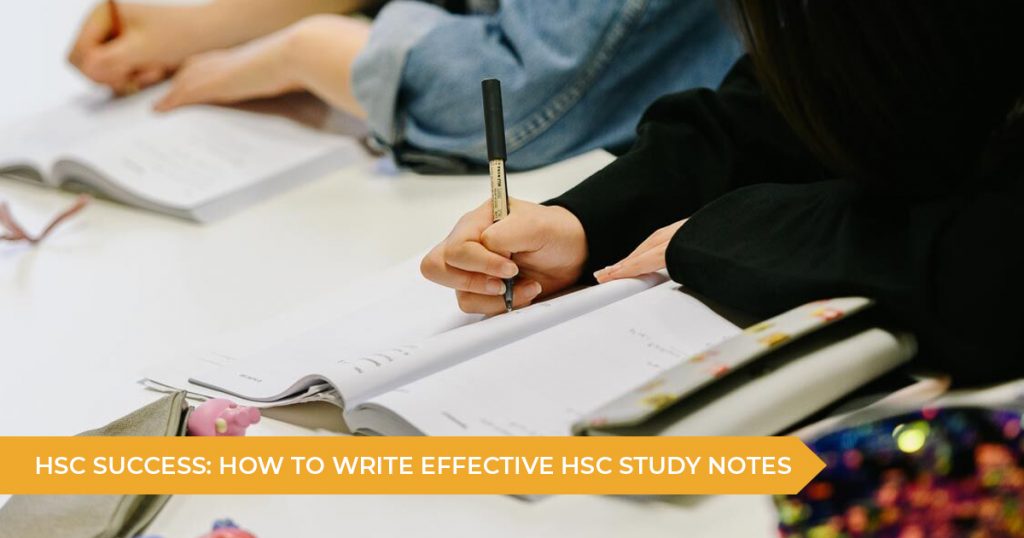 Learning to accurately transcribe information, as well as absorb that information, is essential to learn something new or revise something you already know.

There are, however, a lot of myths out there. Effective note taking is different for each individual, but here are our top tips on taking notes well, both for learning and revision purposes:

One of the most common misconceptions about taking notes in class is that the end purpose of the exercise is to accurately record everything your teacher says so that you can refer to it later and learn from it.

The problem with this approach is that it makes note-taking a static, mindless process. In reality, you learn much more from making the notes than going over them later. This might seem counter-intuitive to those who are used to thinking of notes as tools for later reference, but effective note-taking is actually a dynamic, mindful process where, if you do it correctly, you’ll internalise the information as you document it.

What does this look like in practice? Make sure to write things in your own words, using whatever phrasing, shorthand, and diagrams that make sense to you in the moment. Developing your own note-taking style ought to be favoured over aiming for ‘perfect’, well-presented notes: it’s much more important that you’re recording things in a way that makes as much intuitive sense to you as possible in the moment.

Don’t necessarily write down every bullet point of every PowerPoint slide your teacher shows you: rather, aim to get only the essential details that will enable you to make sense of the concept. This avoids running the risk of ‘missing the forest for the trees’, so to speak – the detail can be refined later.

RELATED: The Best Study Techniques For All Learning Styles

Don’t underestimate the power of handwriting

A common trend in modern classrooms is to see students frantically typing on laptop keyboards in order to record every piece of information they’re presented with. This point goes hand in hand with 1 – handwriting is a much better tool for absorbing the information as you go.

This is for a number of reasons including but not limited to:

Handwriting is a naturally slower process, resulting in a natural ‘speed-limit’ in your transcription rate. This has the side-effect of forcing you to avoid transcription in favour of re-phrasing, shorthand, and diagrammatic notation.

Handwriting recruits more parts of the brain, as it’s a far more deliberate process. When you type, you’re on auto-pilot; typically your notes might be more ‘accurate’ in the sense that you record more of what you’re presented with, but when you handwrite, you force yourself to conceptually understand the material as well as transcribe the relevant parts of it.

Handwriting is more free-form. The pen is mightier than the keyboard when it comes to allowing you to diagrammatically represent information, connecting relevant dot points with arrows and so on, as well as noting down any non-standard notation.

All of this is not to say that typing isn’t also very useful in many situations. The practicality of having textbooks online, the power to transcribe information at greater speed, and the portability of a laptop computer are all advantages to digital note-taking. Nevertheless, handwriting has advantages that typing does not and is an increasingly less utilised form of note-taking in the digital era.

Study by re-creating and revising your notes, not just reading through them

Another common error students make when it comes to note-taking is to aim to have a complete set of ‘summary notes’ by the end of the term, which they treat as their ‘bible’ come study time.

This approach, however, isn’t necessarily the most effective way to utilise your notes. As has already been emphasised, effective note taking is inherently a dynamic process that forces you to practise quickly recalling and understanding information – and this applies not just in making your notes, but when you’re using them to study as well.

Just looking over your notes for reference isn’t enough – to thoroughly understand them and the knowledge they contain, you need to return to the same mental processes that allowed you to learn the knowledge initially. This means employing ‘active’ study strategies like attempting to rewrite notes from memory, adding to and revising your notes as your understanding of the material improves, and testing your memory with flashcards.

Don’t rely on other people’s notes

In case you haven’t reached this conclusion from the points made already, it’s important to make this plain: using (or even purchasing!) others’ notes is not going to be nearly as effective as making your own notes!

You learn far more from making notes than reading over them; by using a comprehensive set of someone else’s study notes, you’re robbing yourself of the opportunity to learn the material by note-taking yourself.

This isn’t to say other people’s notes (as well as other sources of notes and information, like textbooks, libraries, journals, and online articles) aren’t useful! They’re excellent for reference, in order to allow you to summarise the information and learn it by creating your own notes. The distinction here is crucial; referring to other sources is of course a useful process but it’s a process that then lets you embark on your own learning process by taking notes in the manner outlined earlier, not a way of learning in and of itself.

Making your own notes by hand always seems arduous – and rightly so! Learning things for the first time is never easy. It requires a conscious mental effort. That’s why taking notes in your own words, via handwriting, is so much harder than quickly typing and transcribing what a teacher might tell you: the former requires you to internalise and process the information you’re presented with before writing anything down, while the latter bypasses the internalisation stage.

If you learn to embrace this slow, painful learning process while you take notes, you’ll not only become a more effective note-taker – you’ll become a better student, and a self-directed learner.