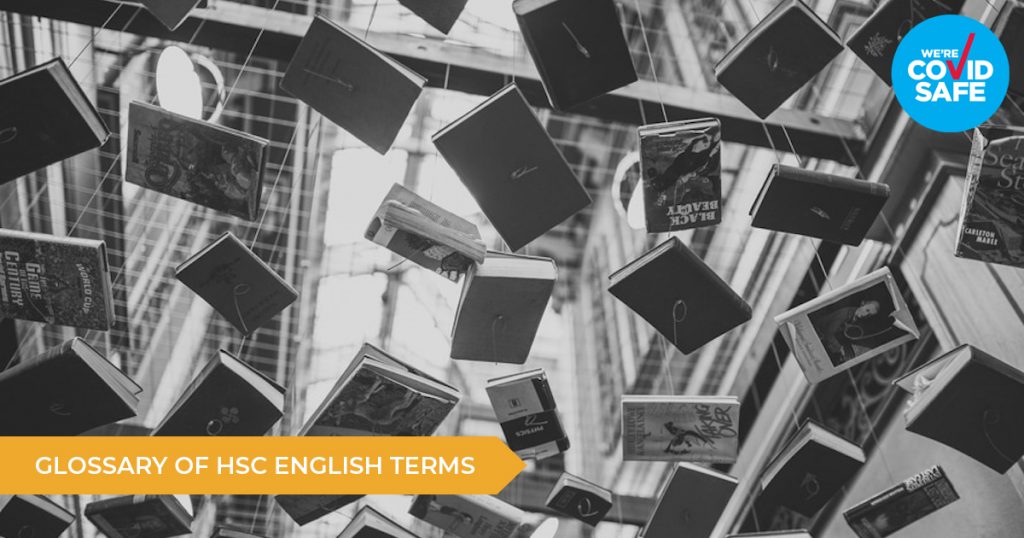 From alliteration to assonance, we have outlined all English terms you should know according to NESA, from Year 7 all the way to Year 12.

You can also adapt some of these key words across other school subjects, so save this list in your favourites and let’s begin:

Adjective: A word class that describes a noun to add extra meaning.

Adverb: A word class that modifies a verb, adjective, or another adverb.

Alliteration: The recurrence, in close succession, of the same consonant sounds usually at the beginning of words ‘ripe, red raspberry.’

Allusion: A deliberate and implicit reference to a person or event, or a work of art which draws on knowledge and experiences shared by the composer and responder.

Analogy: A comparison demonstrating the similarities between two things, people or situations.

Apposition: When one noun group immediately follows another with the same reference, they are said to be in apposition.

Appropriation: Taking an object or text from one context and using it in another context.

Auxiliary verb: A verb that gives further semantic or syntactic information about a main or full verb.

Bias: Favouring one side or viewpoint by ignoring or excluding conflicting information in an argument.

Cohesion: That quality in a text determined by its parts being related and contributing to its overall unity.

Collocation: Words that commonly occur in close association with one another.

Composition: The combination and integration of the various elements of an image into a whole text.

Conjunction: A word that joins other words, phrases or clauses together in logical relationships such as addition, time, cause or comparison.

Connotation: The nuances or shades of meaning attached to words, beyond that of their literal or dictionary meanings.

Context: The range of personal, social, historical, cultural and workplace conditions in which a text is responded to and composed.

Contraction: A shortened form of 1-2 words (one of which is usually a verb).

Dialect: The forms of a given language which differ from one another in details of sound system, vocabulary and grammar, each of which is usually to be found in a particular region or social class.

Discursive texts: Texts whose primary focus is to explore an idea or variety of topics.

Figurative language: Words of phrases used in a way that differs from the expected or everyday usage.

Finite verbs: Ease of flow, for example in talking, reading.

Homonym: A word having the same sound and the same spelling, but a different meaning.

Homophone: A word having the same sound as another but different spelling and meaning.

Idiom: An expression peculiar to any language, that cannot be take literally.

Imagery: The use of figurative language or illustrations to represent objects, actions or ideas.

Imaginative: The ability to use the mind for a wide array of purposes.

Inference: The process of drawing conclusions based on evidence from a text.

Intertextuality: The associations or connections between one text and other texts.

Intonation: The pattern of pitch changed revealed in speech.

Irony: A clash between what the words say and what they mean.

Juxtaposition: The placement of two or more ideas, characters, actions, settings, phrases or words side-by-side for a particular purpose.

Lexical chain: A sequence of related words in writing.

Metaphor: A resemblance between one thing and another is declared by suggesting that one this is another, for example ‘by fingers are ice.’

Metonymy: The use of the name of one thing or attribute of something to represent something larger or related.

Modality: Aspects of language that suggest a particular perspective on events, a speaker or writer’s assessment of possibility, probability, obligation, frequency and conditionality.

Narrative: A story of events or experiences, real or imagined.

Onomatopoeia: The formation of a name or word by imitating the sound associated with the object designated.

Parody: A work intended to ridicule or mock through imitating the ideas, tone, vocabulary and stylistic features of another work.

Personification: Attributing human characteristics to abstractions such as love, objects or animals.

Phoneme: The smallest sound unit in a language that is capable of conveying a distinct meaning.

Poetic devices: Particular patterns and techniques of language used in poems to create particular effects based in the use of sound, the creation of images and other sensory inputs.

Point of view: The particular perspective brought by a composer, responder or character within a piece of text.

Pronoun: A word that is used in place of a noun.

Pun: A figure of speech where there is a play on words. Puns are usually humorous and rely on more that one meaning of a word to emphasise the point.

Recount: A type of text that records events in the sequence in which they occurred.

Reflection: The thought process by which students develop an understanding and appreciation of their own learning.

Related texts: Texts that students have chosen in addition to their prescribed texts.

Satire: The use of one of more of exaggeration, humour, parody, irony, sarcasm or ridicule to expose, denounce and deride folly or vice in human nature and institutions.

Simile: A figure of speech that compares two usually dissimilar things. The comparison starts with ‘like’ or ‘as if.’

Statement: A sentence that provides information.

Stylistic features: The ways aspects of texts, for example words, sentences and images are arranged and how they affect meaning.

Suffix: A word part that is attached to the end of a base word to change the meaning or form.

Synthesise: Combine elements of language or ideas of characters.

Tense: The element that determines when the action or condition of the verb form is located in time.

Theme: Refers to the central or one of the main underlying ideas or messages of a text.

Tone: The voice adopted by a particular speaker to indicate emotion, feeling or attitude to subject matter.

Verb: A verb states what is happening in the sentence.

Become a confident essay writer with the help of our face to face or online tutoring services for Year 7 – 12 students at Talent 100. Click here to explore our timetables, and take a free trial today.