Reading a poem in light of its context 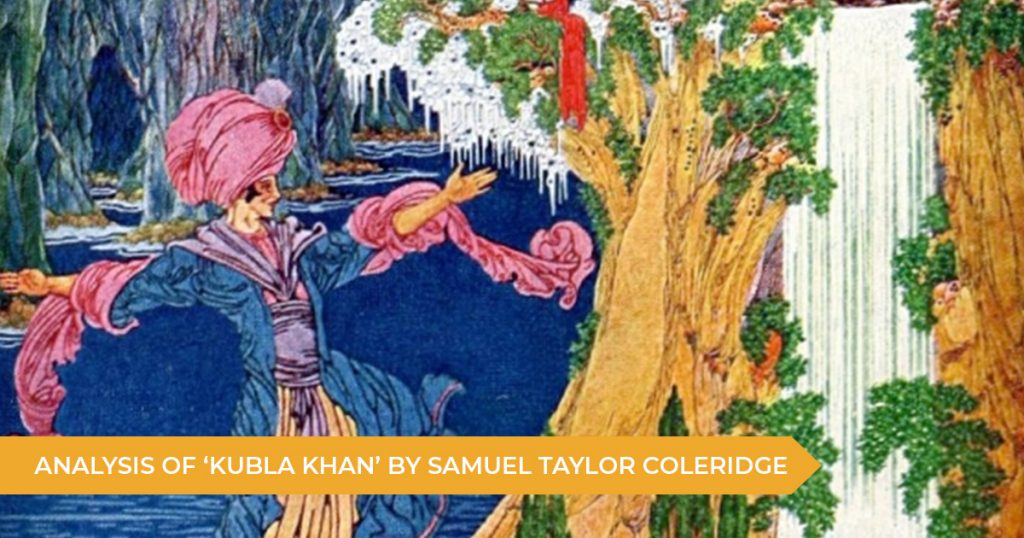 Analysing one of the most famous Romantic poems of the 18th century, Kubla Khan by Samuel Taylor Coleridge.

Let’s explore Samuel Taylor Coleridge’s text ‘Kubla Khan’. Its prose Preface is also by Coleridge, so you can consider it part of his text (but it’s not part of the poem itself). The poem is typical of Romantic poetry in light of its strong supernatural content and its suggestion of the endless possibilities of imagination. Coleridge’s vision of a surreal paradise with its caves of ice, and its explicit aspiration to achieve the ultimate poetic impact on its listeners, clearly celebrate the supernatural and the idea of infinite striving.

‘Kubla Khan or, A Vision in a Dream. A Fragment.’

In the summer of 1797, the author, then in ill health, had retired to a lonely farmhouse between Porlock and Linton, on the Exmoor confines of Somerset and Devonshire. In consequence of a slight indisposition, an anodyne and been prescribed, from the effects of which he fell asleep in his chair at the moment that he was reading the following sentence, or words of the same substance, in Purcha’s Pilgrimage: “Here the Kubla Khan commanded the palace to be built, and a stately garden thereunto. And thus then miles of fertile ground were inclosed with a wall.”

The author continued for about three hours in a profound sleep, at least of the external senses, during which time he has the most vivid confidence that he could not have composed less than from two to three hundred lines; if that indeed can be called composition in which all the images rose up before him as things, with a parallel production of the correspondent expressions, without any sensation or consciousness of effort. On awaking he appeared to himself to have a distinct recollection of the whole, and taking his pen, ink, and paper, instantly and eagerly wrote down the lines that are here preserved. At this moment he was unfortunately called out by a person on business from Porlock, and detained by him above an hour, and on his return to his room, found, to his no small surprise and mortification, that though he still retained some vague and dim recollection of the general purport of the vision, yet, with the exception of some eight or ten scattered lines and images, all the rest had passed away like the images of the surface of a stream into which a stone has been cast, but, alas! without the restoration of the latter!

RELATED: What is Context in English Literature?

Yet from the still surviving recollections in his mind, the author has frequently purposed to finish for himself what had been originally, as were, given to him. [I shall sing a sweeter song today] but the tomorrow is yet to come. As a contrast to this vision, I have annexed a fragment of a very different character, describing with equal fidelity the dream of pain and disease.

In Xanadu did Kubla Khan

Where Alph, the sacred river, ran

Through caverns measureless to man

Down to a sunless sea.

With walls and towers were girdled round:

And there were gardens bright with sinuous rills,

Where blossomed many an incense-bearing tree;

And here were forests ancient as the hills,

But oh! that deep romantic chasm which slanted

Down the green hill athwart a cedarn cover!

A savage place! as holy and enchanted

As e’er beneath a waning moon was haunted

By woman wailing for her demon lover!

And from this chasm, with ceaseless turmoil seething,

As if this earth in fast thick pants were breathing,

A mighty foundation momently was forced:

Amid whose swift half-intermitted burst

Or chafly grain beneath the thresher’s flail:

And ‘mid these dancing rocks at once and ever

It flung up momently the sacred river.

Through wood and dale the sacred river ran,

Then reached the caverns measureless to man,

And sank in tumult to a lifeless ocean:

And ‘mid this tumult Kubla heard from far

The shadow dome of pleasure

Floated midway on the waves;

Where was heard the mingled measure

From the fountain and the caves.

It was a miracle of rare device,

A sunny pleasure dome with caves of ice!

A damsel with a dulcimer

In a vision once I saw:

It was an Abyssinian maid,

And on her dulcimer she played,

Could I revive within me

Her symphony and song,

To such a deep delight ‘twould win me,

That with music loud and long,

I would build that dome in air,

That sunny dome! those caves of ice!

And all who heard should see them there,

And all should cry, Beware! Beware!

His flashing eyes, his floating hair!

Weave a circle round him thrice,

And close your eyes with holy dread,

For he on honeydew hath fed,

And drunk the milk of Paradise.

What is Coleridge’s vision of Xanadu?

– This world is divided into three levels, and they are formed by a series of images. It is the river that joins these three levels – it continually flows from one level to the next.

– First we have Kubla’s earthly paradise enclosed by walls and towers.

– It has a distinctly eastern feel with its pleasure dome and incense trees.

– The images of the natural landscape resonate with a sense of life and vegetation.

– It is a piece of nature that has been cultivated by man; here, even the river which streams from a darker and wilder world flowers in ‘sinuous rills.’

– Next we have the caverns measureless to man, a dark kind of underworld. The exclamation ‘But oh!’ marks a change in tone to mirror the change in description.

– In these caves we find images of the waning moon and a woman wailing for her demon lover.

– The flowing river in Kubla’s paradise wildly bursts out from this chasm, with ‘ceaseless turmoil seething, / As if this earth in fast thick pants were breathing.’ Personification of the fountain – it is described as if it were breathing in thick pants to emphasise the contrast between that calm paradise that was just described, and this underworld with a woman that wails for her demon lover.

– The final level of this vision is the sunless sea, the lifeless ocean. It is the ocean of our world, and it is as if the shadow of the dome that lies upon it echoes the possibilities of another world of Kubla’s paradise.

How is this vision conveyed by the use of aural elements?

– Imagery, personification, exclamations and similes are some features that contribute to the depiction, but this poem’s sounds is one of the greatest accomplishments.

– A great deal of sound patterns occur in this poem and they create a fluctuating and dreamy harmony.

– The great achievement of its musicality derives from the relationship between the rhyme, alliteration and assonance.

– These pattens of sound create the movement of the poem.

– The rhymes have a subtle set of correspondences throughout the entire poem; that is to say, the end rhymes have a corresponding assonance or alliteration. Take, for instance, the poem’s opening lines:

In Xanadu did Kubla Khan

Where Alph, the sacred river, ran

Through caverns measureless to man

Down to a sunless sea.

– Here the lines have end rhymes, but these rhymes are paralleled in the alliteration that closes the first five lines: ‘Kubla Khan, dome decree, river ran, measureless to man, sunless sea.’

– The lines of this poem flow into one another; its sounds (like its images) depict the ebb and flow of running water – the movement of the Sacred River Alph.

– Aurally, it is also a very accomplished piece of writing.

Why is the poem’s conclusion alluding to?

– In the last stanza, Coleridge tells us that once he had a vision of an Abyssinian maid who sung of Mount Abora, and claims that if he could revive that song he could recreate Kubla Khan’s pleasure dome with poetry and song.

– If this could happen, all would cry ‘Beware! Beware! / His flashing eyes, his floating hair! / Weave a circle round him thrice.’ Here, Coleridge is referring to a magical ritual used to protect the inspired poet from intrusion.

– The first and major part of ‘Kubla Khan’ is devoted to describing the magical world of the pleasure dome, but this conclusion is making a comment on poetic creation and the imagination and dreaming.

– It is a celebration of the imagination and the freedom it possesses in dreams. Here, the poet’s ideal is to be able to reproduce the imagination in that same raw, naked state as it exists in dreams; to represent the mind’s endless possibilities. The pleasure dome is a symbol of man-made perfection.

– Coleridge is strongly suggesting here that if he could revive that vision, he could create truly great poetry; he could create his own mystical pleasure dome, because to dream is to create.

Excel in English this year with the help of Talent 100. Learn more about our English Year 7 – 12 course structure, 1-1 tutorials, weekly writing tasks and how we can take your marks to the next level with face-to-face and online class options. Click here for more information.